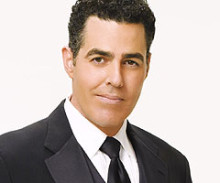 Adam Carolla is one of the most versatile men in Hollywood. He recently hosted Comedy Central’s “Too Late with Adam Carolla” and starred in TLC’s “The Adam Carolla Project,” which chronicled the renovation and subsequent sale of his boyhood home.

Following brief stints as a skilled carpenter and boxing trainer, he began his career in radio after answering an ad seeking a boxing instructor to train then radio personality Jimmy Kimmel of KROQ’s KEVIN AND BEAN SHOW in Los Angeles. He eventually joined the show’s repertoire as Mr. Birchum, a woodshop teacher. Carolla’s success on KROQ led to a hosting job on the nationally syndicated radio program “Loveline,” with Dr. Drew Pinsky. MTV developed a television version of the show, which was co-hosted by Carolla and Pinsky for five seasons (1996-2000). The duo also authored The Dr. Drew and Adam Book: A Survival Guide to Life and Love.

With their partner Daniel Kellison, Carolla and Kimmel are the heads of Jackhole Industries and have created and starred in two hit Comedy Central shows, “The Man Show” (1999-2003) and “Crank Yankers” (2002-present). Jackhole Industries also executive produced “Gerhard Reinke’s Wanderlust,” a comedy travel show which aired on Comedy Central, and a reality-based feature film, Windy City Heat, which won The Comedia Award for Best Film at the 2004 Montreal Just For Laughs comedy festival.

Do you want to hire Adam Carolla? Directly request a quote. In 48 hours we can send you the availability of Adam Carolla If you would like to book Adam Carolla, Entertainment Booking Agency is the right place. We will offer you the best price and contact the management or we directly contact Adam Carolla. For corporate appearances or speaking engagements you can contact our agents and the will help you true the process.

EBA is one of the biggest entertainment booking agencies in the World. We book hundreds of celebrities, artist, athletes and speakers in a year. Important to know is that we are not claiming to be the management of Adam Carolla. We are not the official agent for Adam Carolla. Companies from around the globe book these artists and speakers true our company be course we have one of the biggest networks and we always have direct contact with the artist or the management. We help you to find the right celebrities for your corporate of private events. Please contact one of our agents to get free advice and we will help to get the world-famous artist on your party.