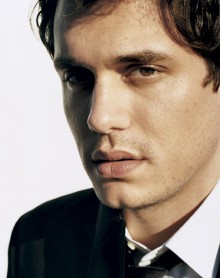 In the 2000s, when he wasn’t shagging starlets or performing stand-up comedy, John Mayer was
leveraging his two distinct gifts: His virtuosic guitar skills and his aptitude for classy pop-rock songs.
Putting those abilities to use both on his solo albums and with the John Mayer Trio, his blues-rock
group, Mayer earned big chart success, becoming the sensitive singer-songwriter of choice for hordes
of Americans.
The middle son of two teachers who grew up in Fairfield, CT, Mayer picked up guitar at age 13 and
was soon playing local blues clubs both solo and with the band Villanova Junction. At 17, he suffered
a cardiac arrhythmia that kept him hospitalized for a week. It was then that his songwriting career
began in earnest. A year after finishing high school, Mayer enrolled at Boston’s Berklee College of
Music on a partial scholarship. He dropped out after his first year to move to Atlanta and play live with
his friend Clay Cook under the name LoFi Masters. Mayer left the duo to record his first EP, 1999′s
Inside Wants Out, which he distributed himself while playing gigs across the South.
Mayer’s big break came after he appeared at 2000′s South by Southwest Music Festival in Austin, TX,
when he signed with Aware Records, a Columbia subsidiary. His first full-length album, Room for
Squares (Number 8, 2001) was picked up by Columbia for wide release. Room for Squares went
multi-platinum on the back of singles “No Such Thing” (Number 13, 2002) and “Your Body Is a
Wonderland” (Number 18, 2002). Columbia followed that success by reissuing Inside Wants Out in
late 2002. After the stopgap live album Any Given Thursday (Number 17, 2003), Mayer’s studio followup, 2003′s Heavier Things, debuted at Number One and yielded singles “Bigger Than My Body”
(Number 33, 2003) and “Daughters” (Number 19, 2004). Another live record, As/Is, followed in 2004.
That year, Mayer began to abandon his sensitive balladeer image in favor of a smart-ass Renaissance
man persona, complete with sardonic blog posts, a column in Esquire magazine, a one-off TV show
on VH1, and a memorable guest spot on The Chappelle Show, jamming in a Harlem barbershop with
members of the Roots.
Around the same time, Mayer began to branch our musically as well. He provided backing vocals on
rapper Common’s single “Go!” and shared the songwriting credit with Common and Kanye West. In his
own music, Mayer began to focus on meatier stuff, particularly the blues. He played shows with Buddy
Guy and Herbie Hancock, and in November 2005 released another live album, Try! (Number 34),
credited to the John Mayer Trio, which included veteran session musicians Steve Jordan on drums
and Pino Palladino on bass. The trio opened for the Rolling Stones on their A Bigger Bang tour that
October. Mayer’s next solo album, the blues-heavy Continuum (Number 2, 2006) followed a year later,
and its quasi-political protest song, “Waiting on the World to Change” (Number 14, 2006), explored
lyrical territory untouched on his previous releases. In 2007, Time magazine featured Mayer as part of
its Time 100 series, lauding his “emphatic voice and emotional fearlessness.” Mayer’s third live album,
Where the Light Is (Number 5, 2008), a three-disc release, featured a solo acoustic set, an electric set
with Jordan and Palladino and an eight-man ensemble performance. Where the Light Is combined
Mayer’s recent solo work with covers of Tom Petty, Jimi Hendrix and Elmore James.
Over the years Mayer has been the subject of much tabloid fodder, having been linked to Jessica
Simpson and actresses Jennifer Love Hewitt and Minka Kelly. His tumultuous relationship with
Jennifer Aniston kept Mayer in the tabloids for months on end. He has also dabbled in stand-up
comedy, and CBS announced in January 2009 that it was developing a variety show pilot starring
Mayer. In 2009, Mayer performed an instrumental version of Michael Jackson’s “Human Nature” at
Jackson’s memorial service, and in November, Mayer released his fourth studio album, Battle Studies,
which debuted at Number One.

Do you want to hire John Mayer? Directly request a quote. In 48 hours we can send you the availability of John Mayer If you would like to book John Mayer, Entertainment Booking Agency is the right place. We will offer you the best price and contact the management or we directly contact John Mayer. For corporate appearances or speaking engagements you can contact our agents and the will help you true the process.

EBA is one of the biggest entertainment booking agencies in the World. We book hundreds of celebrities, artist, athletes and speakers in a year. Important to know is that we are not claiming to be the management of John Mayer. We are not the official agent for John Mayer. Companies from around the globe book these artists and speakers true our company be course we have one of the biggest networks and we always have direct contact with the artist or the management. We help you to find the right celebrities for your corporate of private events. Please contact one of our agents to get free advice and we will help to get the world-famous artist on your party.