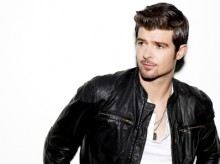 Born in Los Angeles, Robin taught himself to play piano at the age of 12 and by 16 was writing and
producing songs for artists like Brandy, Color Me Badd, and Brian McKnight. By the age of 21, he had
written and produced songs on over 20 gold and platinum albums including Michael Jackson, Marc
Anthony, Pink, Christina Aguilera and others.
One year later he signed with Jimmy Iovine and Interscope records. Soon after he met André Harrell
(former CEO of Uptown Records and mentor to Mary J. Blige, Sean “Puffy” Combs and countless
others). It didn’t take much time for Robin to realize he found the creative partner he needed to make
A Beautiful World, his critically acclaimed debut album released in 2003 under the name “Thicke.”
After A Beautiful World, Thicke continued to work hard and went on to write and produce songs for
Usher’s Grammy winning album Confessions, Lil’ Wayne’s The Carter 2, and Mary J Blige. Soon after
Thicke came out with his breakthrough second release, 2006’s The Evolution Of Robin Thicke. Now
on the way to double platinum status, Evolution’s mega hit “Lost Without U” became the #1 most
played song in Urban Adult Contemporary BDS and topped four Billboard charts simultaneously: #1
R&B /Hip Hop album, #1 Hot R&B / Hip Hop song, #1 Hot R&B Hip Hop Airplay, and #1 Hot Adult R&B
Airplay. Robin established himself as one of the most respected singer-songwriters in soul and R&B
music today. In the summer of 2007 he toured with Beyonce and appeared on Oprah twice.
The year 2007 concluded with the VH1 Soul/Vibe award for “Best Breakthrough Artist” and
nominations from BET (“Best Male R&B” and “Viewer’s Choice”), Soul Train (“Best R&B Soul Album,
Male”), MTV VMA (“Male Artist of the Year”), MOBO (Best Song, “Lost Without U”), the American
Music Awards (“Favorite Breakthrough Artist”) and was named ASCAP’s (Song of the Year, “Lost
Without You”). The award-winning multiplatinum superstar returned to center stage in 2008 with
Something Else, a joyful and modern tribute to the ‘70s soul and pop records that have inspired an
extraordinary career. Revered by critics as one of the best soul albums in years, this ‘70s-inspired
album dealt with racism, poverty, and love in the hits “Dreamworld,” “Magic,” and “The Sweetest
Love.” The album is aptly titled. Debuting at #3 on The Billboard 200, Something Else is Thicke’s
highest charted album to date. Thicke obtained yet another top 10 hit single with “Magic” hitting #2 on
the urban charts. The closing song, “Tie My Hands” was a favorite of Lil Wayne’s and he put it on his
record- breaking album, The Carter 3. They performed the song together at The 2009 Grammys, soon
after he toured with Mary J. Blige.
In December of 2009 Robin released Sex Therapy, an album that created a fantasy world of eroticism,
while still dealing with the honest struggle a man has with seduction, loneliness and betrayal. The title
song, “Sex Therapy,” was hailed by critics as “the sexiest song of the year” and went on to be #1 on
the R&B/ Hip Hop charts and also won an ASCAP Rhythm and Soul Award. Robin’s fifth studio album,
Love After War was released on December 6th, 2011. The first single from the album, the title track
“Love After War” quickly went to #1 on Urban AC and stayed at the top for 2 weeks. The Associated
Press called Love After War a “must buy,” Billboard exclaimed “Thicke has consistently shown himself
to be one of R&B’s most devoted ladies’ men” and Entertainment Weekly called the album “everseductive.” The album is Thicke at his most raw and honest condition yet. It is an album born out of a
desire to be the uncompromising, idealistic artist he was as a boy, married with the weight of being a
man with responsibilities and the scars of the past. Love After War and songs you’ll discover within it,
like “An Angel on Each Arm”, “I’m An Animal”, “Never Give Up”, “Cloud 9″, “Pretty Lil’ Heart” and
“Tears On My Tuxedo” need no explanation: they speak for themselves. Robin believes a song can be
whatever the listener wants it to be. The reasons and decisions that lead him to write his songs are not
important; what matters most is how they make the listener feel. Robin is as faithful to his fans as they
are to him. His ultimate desire is to entertain the listener… to move them… to inspire them… to make
them love more.

Do you want to hire Robin Thicke? Directly request a quote. In 48 hours we can send you the availability of Robin Thicke If you would like to book Robin Thicke, Entertainment Booking Agency is the right place. We will offer you the best price and contact the management or we directly contact Robin Thicke. For corporate appearances or speaking engagements you can contact our agents and the will help you true the process.

EBA is one of the biggest entertainment booking agencies in the World. We book hundreds of celebrities, artist, athletes and speakers in a year. Important to know is that we are not claiming to be the management of Robin Thicke. We are not the official agent for Robin Thicke. Companies from around the globe book these artists and speakers true our company be course we have one of the biggest networks and we always have direct contact with the artist or the management. We help you to find the right celebrities for your corporate of private events. Please contact one of our agents to get free advice and we will help to get the world-famous artist on your party.