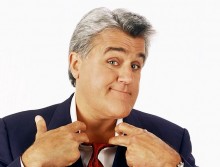 Born in 1950, Jay Leno is an American late-night talk show host and stand-up comedian. He hosted
The Tonight Show with Jay Leno from 1992 to 2009, then hosted his own show, The Jay Leno Show,
for one year due to a host controversy, before returning to The Tonight Show in 2010. Leno is known
for his clean, America-friendly act and his characteristically protruding chin. He has won an Emmy
Award. In April 2013, Leno announced plans to exit The Tonight Show. Jimmy Fallon will be the
show’s new host, beginning after Leno’s contract ends in 2014.
Famed comedian and television host Jay Leno was born James Douglas Muir Leno on April 28, 1950,
in New Rochelle, New York, to father Angelo Leno, an insurance salesman, and mother Cathryn Leno,
a homemaker. He later moved to Andover, Massachusetts, where he spent the duration of his
childhood and young-adult life. As a student in grade school, Leno displayed his comic tendencies with
pranks and practical jokes. His fifth-grade teacher’s report card comments—”if Jay spent as much time
studying as he does trying to be a comedian, he’d be a big star”—turned out to be prophetic. He is
best known for being one of the busiest performers in comedy; for years he booked over 300
appearances annually. He’s also famous for his clean, observational brand of humor and a cartoonlike facial features, which he made reference to in the title of his 1996 autobiography, Leading With My
Chin.
Leno attended Emerson College in Boston, Massachusetts, and graduated in 1973 with a Bachelor of
Arts degree in speech therapy. While in school, Leno performed stand-up comedy in local night clubs,
and emceed talent shows for extra money. He moved to Los Angeles after graduation, and wrote for
the TV show Good Times; a job that fellow late-nighter David Letterman also had. In addition he
worked as the warm-up act for Johnny Mathis and Tom Jones. Leno made his first appearance on The
Tonight Show in 1977, and was a regular on the variety show The Marilyn McCoo and Billy Davis, Jr.
Show. In the mid-1980s, Leno hosted his first comedy special on TV: Jay Leno and the American
Dream. Around this same period, he made numerous successful appearances on late-night TV,
particularly Late Night with David Letterman. Later that year, he signed a deal with NBC that made him
one of two permanent guest hosts of The Tonight Show. He became the only guest host two years
later.
In 1992, Johnny Carson surprised many by retiring from his long-standing role as America’s beloved
and premier talk show host. There had been speculation that David Letterman, whose Late Night show
followed Carson’s, would take over hosting duties, a position he had publicly coveted.

Do you want to hire Jay Leno? Directly request a quote. In 48 hours we can send you the availability of Jay Leno If you would like to book Jay Leno, Entertainment Booking Agency is the right place. We will offer you the best price and contact the management or we directly contact Jay Leno. For corporate appearances or speaking engagements you can contact our agents and the will help you true the process.

EBA is one of the biggest entertainment booking agencies in the World. We book hundreds of celebrities, artist, athletes and speakers in a year. Important to know is that we are not claiming to be the management of Jay Leno. We are not the official agent for Jay Leno. Companies from around the globe book these artists and speakers true our company be course we have one of the biggest networks and we always have direct contact with the artist or the management. We help you to find the right celebrities for your corporate of private events. Please contact one of our agents to get free advice and we will help to get the world-famous artist on your party.