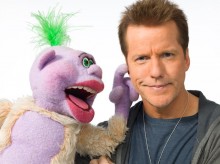 Comedian and ventriloquist, Jeffrey Dunham was born on April 18, 1962, in Dallas, Texas. Beginning
with his wildly popular DVD release, Spark of Insanity (2007), Dunham has been one of the world’s
top-grossing comedians. His characters — popular and controversial at the same time — have inspired
praise from his fans, and sharp rebukes from his critics.
His ventriloquism career began at the age of 8, when his parents gave him as a Mortimer Snerd
dummy — a character made famous by the renowned ventriloquist, Edgar Bergen — as a Christmas
present. The dummy became a constant companion at Dunham’s side, and he began accepting nearly
any performance request that came his way. He was a regular at local Kiwanis clubs, and by high
school Dunham was doing commercials for a Dallas Datsun dealership. For Dunham, the
performances allowed him to say the kinds of things to people in positions of power that he’d never be
able to utter off-stage. And as his reputation as a ventriloquist grew in the greater-Dallas community,
so did the size of his targets. At a Dallas Cowboys function, he poked fun at the team’s Hall of Fame
quarterback, Roger Staubach. Later, during a show for General Electric, he did the same with GE
head Jack Welch.
“It’s amazing how these little guys can say things that a mortal human could never get away with,”
Dunham has said. “There’s some sort of unspoken license … when outlandish things come out of an
inanimate object, somehow it equals humor.” After high school, Dunham enrolled at Baylor University.
The demands on his schedule did not let up. His weekends were consumed with airline flights around
the country to his various performances. Around this time, Dunham also developed three characters
that would be a continual part of his routine: the childlike Peanut; the grumpy old Walter; and the
unusual looking José, the Jalapeño on a Stick.
By the mid-1990s, Dunham had relocated to Los Angeles. In addition to a steady diet of comedy clubs,
the ventriloquist was making semi-regular appearances on late-night television. But it would take
almost another decade for the hard working Dunham to achieve true mainstream success. That
started to happen in 2006, when, after years of resistance, Comedy Central changed course and
decided to showcase Dunham’s self-produced one-hour special, Arguing with Myself. The results were
astounding. More than two million viewers tuned in to see the ventriloquist, prompting the network to
book him again. That second performance, 2007′s Spark of Insanity, hauled in record ratings and sold
more than a million DVDs. His follow-up the next year, A Very Special Christmas Special, delivered
similar results. After his act hit popular entertainment outlets, Dunham’s success put him on par with
comedy giants like Jerry Seinfeld and Chris Rock, in terms of gross sales and viewership
His limited-series program, The Jeff Dunham Show, was a Comedy Central record breaker, and he
demonstrated comic reach internationally — a feat which few comedians can boast. Still, Dunham’s
material and style aren’t for everyone. Some critics have complained about his sophomoric humor,
something Dunham, who seems to delight in the fact that his material isn’t terribly complicated, doesn’t
shy away from. Others have suggested that Dunham, who has a large conservative following and
whose fame came in the wake of other blue-collar style comics like Jeff Foxworthy, feeds off of
stereotypes. One of his popular characters is Achmed the Dead Terrorist, and insults between the
performer and his puppets have included the line, “You’re from Planet Retard.” But Dunham defends
his performances by saying he’s an equal opportunity insulter. “I’ve skewered whites, blacks,
Hispanics, Christians, Jews, Muslims, gays, straights, rednecks, addicts, the elderly and my wife,” he
has said. “As a standup comic, it is my job to make sure the majority of people laugh, and I believe
that comedy is the last true form of free speech.”
In late 2010, Dunham published his autobiography, All By My Selves: Walter, Peanut, Achmed and
Me.

Do you want to hire Jeff Dunham? Directly request a quote. In 48 hours we can send you the availability of Jeff Dunham If you would like to book Jeff Dunham, Entertainment Booking Agency is the right place. We will offer you the best price and contact the management or we directly contact Jeff Dunham. For corporate appearances or speaking engagements you can contact our agents and the will help you true the process.

EBA is one of the biggest entertainment booking agencies in the World. We book hundreds of celebrities, artist, athletes and speakers in a year. Important to know is that we are not claiming to be the management of Jeff Dunham. We are not the official agent for Jeff Dunham. Companies from around the globe book these artists and speakers true our company be course we have one of the biggest networks and we always have direct contact with the artist or the management. We help you to find the right celebrities for your corporate of private events. Please contact one of our agents to get free advice and we will help to get the world-famous artist on your party.