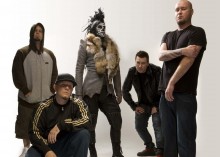 Limp Bizkit is an American rock band from Jacksonville, Florida. The band’s lineup consists of Fred
Durst (lead vocals), Wes Borland (guitar), Sam Rivers (bass), John Otto (drums) and DJ Lethal. Limp
Bizkit has been nominated for three Grammy Awards and have won several other major awards. The
band has sold an estimated 35 million albums worldwide.
The band’s first full length recording, “Three Dollar Bill, Yall$,” was released in 1997 on Interscope.
The album fared poorly on the Billboard 200 at the time of its release, although it did sell steadily over
time due to extensive touring.The band achieved mainstream success with their second studio album,
”Significant Other”, released in 1999 which debuted at number 1 on the Billboard 200 and received
mostly positive reviews. The album sold 834,000 copies in its first week and has sold over 16 million
copies worldwide. The first single “Nookie”, was an enormous hit on rock radio, reaching the top 10 in
both rock and rap charts. The band followed-up the single with three simultaneously released singles –
“Break Stuff”, “Re-Arranged” and “N 2 Gether Now.”
Their third studio album, ”Chocolate Starfish and the Hot Dog Flavored Water”, released in 2000,
continued the band’s success. The album sold 1.05 million copies in its first week, making it the
fastest-selling rock album ever. The first two singles “My Generation” and “Rollin’ (Air Raid Vehicle)”
were released at the same time in promotion of the album.Following the departure of Wes Borland in
2001, Mike Smith was brought in as a replacement for the fourth studio album, ”Results May Vary”,
released in 2003. “Results May Vary,” their fourth album, debuted at #3 with roughly 320,000 copies
sold, breaking the group’s #1 spree on the Billboard 200. It received platinum certification (1 million
copies sold) in the United States in 2008, almost 5 years after its release.
Borland rejoined the band in 2005 for the release of an EP, ”The Unquestionable Truth (Part 1)” but
departed again. The EP debuted at number 24 on the Billboard 200 and selling only 37,000 copies in
its first week. It has sold just slightly over 100,000 in the US.
Borland rejoined the band in February 2009. To date, the band has sold an estimated 35 million
albums worldwide.

Do you want to hire Limp Bizkit? Directly request a quote. In 48 hours we can send you the availability of Limp Bizkit If you would like to book Limp Bizkit, Entertainment Booking Agency is the right place. We will offer you the best price and contact the management or we directly contact Limp Bizkit. For corporate appearances or speaking engagements you can contact our agents and the will help you true the process.

EBA is one of the biggest entertainment booking agencies in the World. We book hundreds of celebrities, artist, athletes and speakers in a year. Important to know is that we are not claiming to be the management of Limp Bizkit. We are not the official agent for Limp Bizkit. Companies from around the globe book these artists and speakers true our company be course we have one of the biggest networks and we always have direct contact with the artist or the management. We help you to find the right celebrities for your corporate of private events. Please contact one of our agents to get free advice and we will help to get the world-famous artist on your party.