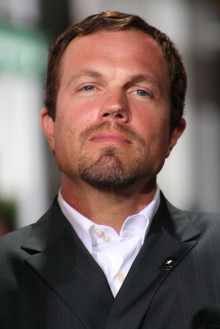 Baldwin was born in Chicago, Illinois. He studied at New Trier Township High School East in Winnetka, Illinois, and once worked as a truck driver. Appearing in dozens of films since 1980, Baldwin rose to prominence as the troubled outcast, Ricky Linderman, in My Bodyguard (1980), and moved on to bigger roles in D.C. Cab (1983), Full Metal Jacket (1987), Independence Day (1996), Smoke Jumpers (1996) and Serenity (2005) in which he reprises his role as the mercenary Jayne Cobb from the television series Firefly. His other work includes the movie Radio Flyer (1992), From the Earth to the Moon (1998), The X-Files (Knowle Rohrer), Men in Black: The Series, Stargate SG-1, Angel, The Inside, NCIS and the 2005 remake of The Poseidon Adventure. He also starred in the ABC series Day Break as Chad Shelten in 2006.

Baldwin won a SyFy Genre Award in 2006 for Best Supporting Actor/Television for his role as Jayne Cobb in the television series Firefly. Baldwin was cast as the voice of Clark Kent/Superman in the first DC animated universe movie, Superman: Doomsday, based on DC Comics’ The Death of Superman. He portrays Major John Casey on the new NBC series Chuck. The show premiered September 24, 2007.

Baldwin has a role as a voice actor in the Xbox 360 game Halo 3. He voices a Marine in the game. He is joined in this capacity by former Firefly colleagues Nathan Fillion and Alan Tudyk. The personality each of these actors are given in the game match those from their characters in Firefly. At several points in the game he is heard to shout “Have a taste of Vera!”, a direct reference to his gun in the show. The line “sure would be nice if we had some grenades,” from the movie Serenity, also appears.

Baldwin also appears as a voice actor in Half Life 2: Episode 2 as additional voices for resistance soldiers.

Do you want to hire Adam Baldwin? Directly request a quote. In 48 hours we can send you the availability of Adam Baldwin If you would like to book Adam Baldwin, Entertainment Booking Agency is the right place. We will offer you the best price and contact the management or we directly contact Adam Baldwin. For corporate appearances or speaking engagements you can contact our agents and the will help you true the process.

EBA is one of the biggest entertainment booking agencies in the World. We book hundreds of celebrities, artist, athletes and speakers in a year. Important to know is that we are not claiming to be the management of Adam Baldwin. We are not the official agent for Adam Baldwin. Companies from around the globe book these artists and speakers true our company be course we have one of the biggest networks and we always have direct contact with the artist or the management. We help you to find the right celebrities for your corporate of private events. Please contact one of our agents to get free advice and we will help to get the world-famous artist on your party.