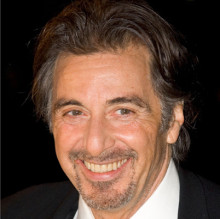 Arguably the greatest and most accomplished actor of his generation, Al Pacino became a cultural icon thanks to revered performances in a wide range of classic films, including “The Godfather” (1972), “Scarface” (1983) and “Glengarry Glen Ross” (1992). Coming to prominence during the 1970s – a period commonly regarded as Hollywood’s last Golden Age – he possessed none of the classic features of leading men from Tinseltown’s previous heyday, but nonetheless, enthralled audiences with absorbing performances on screens both large and small. As a Method actor, Pacino revealed the dark complexities of characters like Frank Serpico, Sonny Wortzik and Colonel Frank Slade. But in life, the actor remained an elusive figure, preferring to avoid disclosing anything of a personal nature. Despite such reluctance to open up about his life, Pacino maintained a long, prominent career in which he accomplished acting’s rarest of feats – winning Oscar, Emmy and Tony awards.

Born on April 25, 1940 in South Bronx, NY, he was raised by his mother, Rose, and maternal grandparents, after his father, Salvatore, an insurance salesman and restaurateur, abandoned the family when Pacino was two years old. Thanks to being exposed to theater and movies through his mother, he alleviated loneliness and shyness by acting out scenes from “The Lost Weekend” to wh ver would pay attention. Pacino later attended The School of Performing Arts, but dropped out when he was 17; instead studying at HB Studio and apprenticing at such avant-garde off-off-Broadway venues as Elaine Stewart’s Cafe LaMaMa and Julian Beck and Judith Malina’s Living Theatre. In one of those life changing events that seemed innocuous at the time, Pacino was cast in August Strindberg’s “Creditors,” directed by Charlie Laughton – the two went on to be lifelong friends – an experience that convinced him that he could be an actor. Pacino moved on to train at the fabled Actors Studio under Lee Strasberg, acquiring the Method acting intensity that propelled him to stardom.

Do you want to hire Al Pacino? Directly request a quote. In 48 hours we can send you the availability of Al Pacino If you would like to book Al Pacino, Entertainment Booking Agency is the right place. We will offer you the best price and contact the management or we directly contact Al Pacino. For corporate appearances or speaking engagements you can contact our agents and the will help you true the process.

EBA is one of the biggest entertainment booking agencies in the World. We book hundreds of celebrities, artist, athletes and speakers in a year. Important to know is that we are not claiming to be the management of Al Pacino. We are not the official agent for Al Pacino. Companies from around the globe book these artists and speakers true our company be course we have one of the biggest networks and we always have direct contact with the artist or the management. We help you to find the right celebrities for your corporate of private events. Please contact one of our agents to get free advice and we will help to get the world-famous artist on your party.