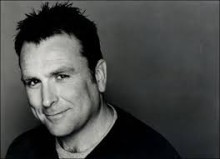 Colin Quinn is an Irish-American comedian. He was born in Brooklyn and was raised in the Park Slope section of the borough. His gravelly Brooklyn accent and mannerisms are a trademark of his performances. Quinn performs stand-up, headlining at the top comedy clubs across the country, including Caroline’s Comedy Club in New York City.

He is known in the comedy circuit for helping out many young stand-up comics, which was most apparent to the public on the series Tough Crowd with Colin Quinn. Tough Crowd featured four comedians and Quinn as host, talking about various issues. Quinn gave many comedians exposure on his show, which ran for roughly 250 episodes over a two-year period. Before becoming a comedian, Quinn worked as a bartender. He stopped drinking in the early 1980s after several bad experiences while drunk, including nights spent in jail and blackouts that led to him not knowing where he was.

After leaving bartending, Quinn got his start in stand-up comedy in 1984. Although some people believe Jon Stewart wrote the jokes for Quinn’s stand-up act, this is false; Stewart only wrote jokes for a television show Quinn hosted in 1989 called Caroline’s Comedy Hour, which aired on the A&E network.

He first achieved fame in 1987 as co-host of the MTV game show Remote Control, which also featured performances by Adam Sandler and Denis Leary. He remained co-host of the show for three years, and in 1989 wrote and performed in the comedic short Going Back to Brooklyn along with Ben Stiller. Much of his early comedic career focused on writing in addition to stand-up, including a stint as a writer for the popular show In Living Color. He also co-wrote the storyline and was an associate producer for the movie Celtic Pride, starring Damon Wayans and Dan Aykroyd.

In 1995, Quinn was hired by Saturday Night Live, working as a writer and featured player until the beginning of the 1998 season, when he became a full cast member. He established himself on the show with characters such as “Lenny the Lion” and “Joe Blow”, and as well as the recurring segment “Colin Quinn Explains the New York Times”. Quinn took over as host of the “Weekend Update” segment in January, 1998 after the firing of Norm MacDonald; he remained the anchor until his departure from SNL in 2000.

Also during his SNL period, Quinn made his Broadway debut in his one-man show, Colin Quinn: An Irish Wake co-written with fellow comedian Lou DiMaggio, and was offered the role of Scott Evil in Austin Powers: International Man of Mystery by Mike Myers, though he turned down the role to work on his writing projects. The role was taken up by Seth Green. After leaving SNL, Quinn had a sketch comedy show on NBC called The Colin Quinn Show that lasted for only three episodes in 2002, after being cancelled due to surprisingly strong, “edgy” racial content and mediocre ratings.

Quinn became host of Tough Crowd with Colin Quinn on Comedy Central in 2003. The show immediately followed The Daily Show with Jon Stewart. “Tough Crowd”, although having been renewed through the 2005 television season, was put on an indefinite hiatus in October, 2004, having its “final” episode on November 4, 2004. Colin performs regularly at the Comedy Cellar in New York City, where many of the top comedians perform when not on the road.

During his time on “SNL” and “Tough Crowd,” Quinn was criticised for his inability to properly read from cue cards or a teleprompter. However, fans of both shows agree that Quinn’s sharp and clever delivery often more than made up for this fault. In 2004, Comedy Central named Quinn to its list of the “100 Greatest Stand-Ups of All Time”, placing him at #56. He was also named to the Irish America Magazine list of the “Top 100 Irish Americans of the Year”.

Do you want to hire Colin Quinn? Directly request a quote. In 48 hours we can send you the availability of Colin Quinn If you would like to book Colin Quinn, Entertainment Booking Agency is the right place. We will offer you the best price and contact the management or we directly contact Colin Quinn. For corporate appearances or speaking engagements you can contact our agents and the will help you true the process.

EBA is one of the biggest entertainment booking agencies in the World. We book hundreds of celebrities, artist, athletes and speakers in a year. Important to know is that we are not claiming to be the management of Colin Quinn. We are not the official agent for Colin Quinn. Companies from around the globe book these artists and speakers true our company be course we have one of the biggest networks and we always have direct contact with the artist or the management. We help you to find the right celebrities for your corporate of private events. Please contact one of our agents to get free advice and we will help to get the world-famous artist on your party.