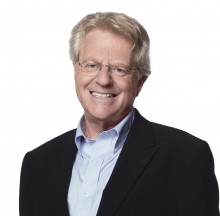 Born February 13, 1944, Jerry Springer is a London-born American talk show host, best known for his
tabloid talk show, The Jerry Springer Show. He is a former mayor of Cincinnati, Ohio. Before being
signed on for his own show, Springer was the anchor and managing editor of WLWT. While there, he
earned seven Emmys. The Jerry Springer Show debuted in 1991, and eventually garnered huge
ratings for its focus on lowbrow topics.
Journalist, talk show host and politician Jerry Springer was born Gerald Norman Springer on February
13, 1944, in a tube station in London, England. His parents, Margo and Richard Springer, were Polish
Jews who escaped from Germany during the Holocaust. Springer’s birth came shortly after the family’s
emigration and, by the time Springer was five years old, his family had moved again—this time to the
Queens area of New York City. For Springer and his family, America represented a place where
people could live without persecution. Springer’s college years took him south to New Orleans,
Louisiana, where he earned his bachelor’s degree in political science at Tulane University in 1965. He
then received his law degree from Northwestern University in Chicago, Illinois. Shortly after earning his
Juris Doctor in 1968, Springer met New York Senator Robert Kennedy at a dinner party. Springer
signed on with the Kennedy’s presidential campaign shortly after. Kennedy’s assassination occurred
on June 5, 1968, only a few months after Springer began helping the candidate on the campaign trail.
The incident took an emotional toll on Springer, who felt compelled to continue Kennedy’s political
vision.
The next year, Springer took a job with the law firm Frost & Jacobs in Cincinnati, Ohio. While at the
firm, the 25-year-old Springer spearheaded the movement in Ohio to lower the voting age from 21 to
18, which culminated in his Senate Judiciary Committee testimony supporting ratification of the 26th
Amendment to the Constitution. He then ran for Congress in Ohio in 1970, nearly beating the
entrenched Republican incumbent, Donald Clancy. In 1971, he won a seat on the Cincinnati City
Council and served five terms before becoming mayor at the age of 33, with the largest plurality in the
city’s history. Springer served two terms as mayor of Cincinnati.
After an unsuccessful bid for governor of Ohio in 1982, Springer was courted by several networks,
ultimately signing with the Cincinnati NBC affiliate WLWT. As their anchor and managing editor,
Springer took WLWT to first place in the news rankings. It was his nightly commentaries, the precursor
to his now legendary “Final Thought,” that landed him seven Emmys. Springer was voted television’s
best anchor for five consecutive years by readers of Cincinnati Magazine. Springer’s success on the
network led to his own WLWT talk show, which debuted on September 30, 1991. The first season of
The Jerry Springer Show aired originally as a politically charged talk show, with episode topics
including the social effects of rock ‘n’ roll, gun control, and homelessness. It also featured high-profile
guests such as Jesse Jackson and Oliver North. To improve the ratings, the network brought in a new
producer for the 1994 season, and the show began targeting a younger audience. Shortly thereafter,
the show moved filming to Chicago, prompting Springer to leave Cincinnati. The new version of
Springer’s talk show garnered huge ratings, and lots of attention. By 1998—the same year that
Barbara Walters named Springer one of the world’s “10 Most Fascinating People”—The Jerry Springer
Show was reaching more than 6.7 million viewers, and had become an inspiration for dozens of
imitators, including the award-winning British musical, Jerry Springer: The Opera in 2003. In 2007,
NBC-Universal announced it would carry The Jerry Springer Show through its 2010 season. The show
was renewed again in the fall of 2010, picked up by NBC-Universal through the 2013-14 season. The
year 2012 marked Springer’s 22nd season.
In addition to his success in the TV talk-show circuit, Springer became a morning radio talk-show host.
His progressive Springer On The Radio show hit the airwaves on January 17, 2005. Broadcast in 85
markets, including many Air America affiliates, the show would last for two years. In 2006, Springer
showcased his dancing ability as a contestant on the program Dancing With The Stars, finishing in the
top five. In 2009, Springer traveled to London to star in the role of Billy Flynn in the West End

production of the play Chicago. His performance earned him critical acclaim, and landed him a reprisal
of the role on Broadway in August of 2009. Additionally, he starred for a week in a production of the
Rocky Horror Show Live. A man of diverse talents, Springer stepped into the studio to record a country
music CD; written his memoirs in the book Ringmaster (1998); and has had his own late-night variety
show in both England and South Africa. He also hosted NBC’s hit series America’s Got Talent for the
2007 and 2008 seasons, and hosted the live show on the Las Vegas strip. Additionally, he twice
served as the master of ceremonies for the Miss World Pageant and, in the summer of 2008, hosted
the Miss Universe Pageant. In 2006, Springer garnered new media attention, this time for his footwork,
when he performed as a contestant on season 3 of the hit series Dancing with the Stars.
Today, because of his lasting popularity, Springer is a favorite guest speaker at college campuses
throughout the United States. He has also graced the cover of Rolling Stone, Esquire and New York
Magazine throughout his career.

Do you want to hire Jerry Springer? Directly request a quote. In 48 hours we can send you the availability of Jerry Springer If you would like to book Jerry Springer, Entertainment Booking Agency is the right place. We will offer you the best price and contact the management or we directly contact Jerry Springer. For corporate appearances or speaking engagements you can contact our agents and the will help you true the process.

EBA is one of the biggest entertainment booking agencies in the World. We book hundreds of celebrities, artist, athletes and speakers in a year. Important to know is that we are not claiming to be the management of Jerry Springer. We are not the official agent for Jerry Springer. Companies from around the globe book these artists and speakers true our company be course we have one of the biggest networks and we always have direct contact with the artist or the management. We help you to find the right celebrities for your corporate of private events. Please contact one of our agents to get free advice and we will help to get the world-famous artist on your party.