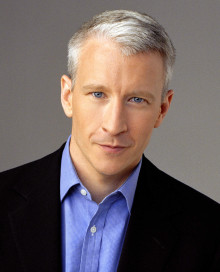 He was a student of The Dalton School, a private school in New York, and attended Yale University, studying political science and international relations. He graduated in 1989, but not before interning with the CIA. Rather than stick with the agency, he pursued a career as a journalist.

But it wasn’t easy. In fact, Cooper couldn’t even get in the door at ABC. So he forged a press pass and, using some trust fund money, one presumes, hopped a plane to war torn Burma. There he met with rebels fighting the Burmese government, created news reports, and sold them to his employer at the time, Channel One, an in-school TV network for school-aged children. That success led to more field reports from war zones across the globe – and a gig at ABC, where he first tried to work.

There, Cooper worked as a correspondent and co-anchor on ABC’s World News Now. He even branched out, become host of ABC’s reality game show – and Survivor challenger, The mole. He even sat in as substitute co-host of Live with Regis and Kelly.

He returned to news reporting after 9/11, joining cable news network CNN. He began as a morning anchor and moved to weekend prime-time anchor after some time. He became the anchor of the popular Anderson Cooper 360 in 2003. There he became the epitome of his news anchor philosophy: Be yourself, admit what you don’t know, talk about what you know.

After his award winning – and ratings winning – coverage of Hurricane Katrina, Cooper was named co-anchor of CNN’s NewsNight. That is, until his 360 was expanded to include theNewsNight hour.The next phase for Cooper seems to be talk show host, as his syndicated Anderson will hit airwaves in 2011.

Do you want to hire Anderson Cooper? Directly request a quote. In 48 hours we can send you the availability of Anderson Cooper If you would like to book Anderson Cooper, Entertainment Booking Agency is the right place. We will offer you the best price and contact the management or we directly contact Anderson Cooper. For corporate appearances or speaking engagements you can contact our agents and the will help you true the process.

EBA is one of the biggest entertainment booking agencies in the World. We book hundreds of celebrities, artist, athletes and speakers in a year. Important to know is that we are not claiming to be the management of Anderson Cooper. We are not the official agent for Anderson Cooper. Companies from around the globe book these artists and speakers true our company be course we have one of the biggest networks and we always have direct contact with the artist or the management. We help you to find the right celebrities for your corporate of private events. Please contact one of our agents to get free advice and we will help to get the world-famous artist on your party.