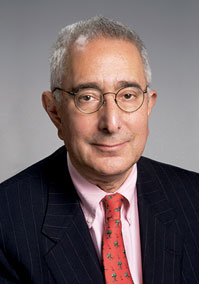 Ben Stein is probably the closest any man comes these days to being a true renaissance man. His financial and economics work was cited in the efforts of the recent Nobel prize winner in Economics, George Akerlof. He is also the host of the long running comedy quiz show on Comedy Central, Win Ben Stein’s Money, a show that has won seven Emmys. He has written hundreds of thousands of words about financial fraud and investment policy, but two words made him a household name: “Bueller” and “Anyone, anyone” (from his iconic role in Ferris Bueller’s Day Off).

He has written novels that the New York Times describes as “stunning,” but what you have probably heard him talk about recently are “dry eyes, red eyes, and clear eyes.” He worked and demonstrated and struggled for voting rights for African Americans, and he also was a speech writer for Richard Nixon and for Gerald Ford. He introduced the world to complex concepts of the politics of culture, but he also introduced the world to Jimmy Kimmel and made possible The Man Show. Lawyer, teacher, actor, comic, economist, father, novelist, essayist, expert on finance – this is Ben Stein!

Ben Stein (Benjamin J. Stein) was born November 25, 1944 in Washington, D.C. (he is the son of the economist and writer Herbert Stein), grew up in Silver Spring, Maryland, and attended Montgomery Blair High School. He graduated from Columbia University in 1966 with honors in economics. He graduated from Yale Law School in 1970 as valedictorian of his class by election of his classmates. He helped to found the Journal of Law and Social Policy while at Yale. He has worked as a poverty lawyer in New Haven and Washington, D.C., a trial lawyer in the field of trade regulation at the Federal Trade Commission in Washington, D.C., a university adjunct at American University in Washington, D.C., at the University of California at Santa Cruz, and at Pepperdine University in Malibu, CA. At American U, he taught about the political and social content of mass culture. He taught the same subject at UCSC, as well as about political and civil rights under the Constitution. At Pepperdine, he has taught about libel law and about securities law and ethical issues since 1986.

In 1973 and 1974, he was a speech writer and lawyer for Richard Nixon at the White House and then for Gerald Ford. (He did NOT write the line, “I am not a crook.”) He has been a columnist and editorial writer for The Wall Street Journal, a syndicated columnist for The Los Angeles Herald Examiner (R.I.P.) and King Features Syndicate, and a frequent contributor to Barrons, where his articles about the ethics of management buyouts and issues of fraud in the Milken Drexel junk bond scheme drew major national attention. He has been a regular columnist for Los Angeles magazine, New York magazine, E! Online, and most of all, has written a lengthy diary for ten years for The American Spectator. He also writes frequently for The Washington Post, The Wall Street Journal, Op. Ed., and almost every other imaginable magazine.

He has written and published sixteen books, seven novels, largely about life in Los Angeles, and nine nonfiction books, about finance and about ethical and social issue in finance, and also about the political and social content of mass culture. He has done pioneering work in uncovering the concealed messages of TV and in explaining how TV and movies get made. His titles include A License to Steal, Michael Milken and the Conspiracy to Bilk the Nation, The View From Sunset Boulevard, Hollywood Days, Hollywood Nights, DREEMZ, Financial Passages, Ludes, and the best-selling humor self-help book, How To Ruin Your Life. He has also been a longtime screenwriter, writing, among many other scripts (most of which were unmade) the first draft of The Boost, a movie based on Ludes, and the outlines of the lengthy mini-series Amerika, and the acclaimed Murder in Mississippi. He was one of the creators of the well regarded comedy, Fernwood Tonight.

He is also an extremely well known actor in movies, TV, and commercials. His part of the boring teacher in Ferris Bueller’s Day Off was recently ranked as one of the fifty most famous scenes in American film. Starting in July of 1997, he has been the host of the Comedy Central quiz show, Win Ben Stein’s Money. The show has won seven Emmys. He appears regularly on the Fox News Channel talking about finance. He was currently a celebrity judge on the CBS hit, Star Search.

He is presently at work on a detective show for CBS. He lives with his wife, Alexandra Denman ( former lawyer), his son, Tommy, four cats and two large dogs in Beverly Hills.

Do you want to hire Ben Stein? Directly request a quote. In 48 hours we can send you the availability of Ben Stein If you would like to book Ben Stein, Entertainment Booking Agency is the right place. We will offer you the best price and contact the management or we directly contact Ben Stein. For corporate appearances or speaking engagements you can contact our agents and the will help you true the process.

EBA is one of the biggest entertainment booking agencies in the World. We book hundreds of celebrities, artist, athletes and speakers in a year. Important to know is that we are not claiming to be the management of Ben Stein. We are not the official agent for Ben Stein. Companies from around the globe book these artists and speakers true our company be course we have one of the biggest networks and we always have direct contact with the artist or the management. We help you to find the right celebrities for your corporate of private events. Please contact one of our agents to get free advice and we will help to get the world-famous artist on your party.