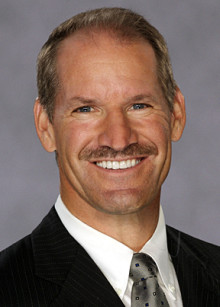 “We are always looking for ways to improve our team,” says Petitti. “Anytime you get a chance to add someone with Bill Cowher’s experience, knowledge and passion for the game, you have to take it. We are extremely excited to be adding one of the NFL’s truly great personalities and one of its most popular people to THE NFL TODAY team.”

Cowher’s Steelers teams earned 10 post-season berths, captured eight division titles, advanced to six AFC Championship games, made two Super Bowls appearances and won one Super Bowl title. He led the Steelers to post-season appearances in each of his first six seasons tying an NFL record originally set by Cleveland Browns legendary head coach Paul Brown. Cowher is one of only six coaches in NFL history to claim at least eight division titles. During his 15 seasons, the Steelers tied (New England) for the league’s most division titles and posted the NFL’s best overall record in the regular season.

Cowher played five years as a linebacker and special teams standout for the Cleveland Browns (1980-82) and the Philadelphia Eagles (1983-84). He began his coaching career as a special teams coach in 1985 under Marty Schottenheimer and followed him to Kansas City as the eventual defensive coordinator before moving to Pittsburgh as head coach.

A native of Pittsburgh, Pa., Cowher was born on May 8, 1957. He played linebacker for four years at North Carolina State University and graduated with a Bachelor of Science degree in Education in 1979. Cowher and his wife, Kaye, have three daughters and reside in Raleigh, N.C.

Do you want to hire Bill Cowher? Directly request a quote. In 48 hours we can send you the availability of Bill Cowher If you would like to book Bill Cowher, Entertainment Booking Agency is the right place. We will offer you the best price and contact the management or we directly contact Bill Cowher. For corporate appearances or speaking engagements you can contact our agents and the will help you true the process.

EBA is one of the biggest entertainment booking agencies in the World. We book hundreds of celebrities, artist, athletes and speakers in a year. Important to know is that we are not claiming to be the management of Bill Cowher. We are not the official agent for Bill Cowher. Companies from around the globe book these artists and speakers true our company be course we have one of the biggest networks and we always have direct contact with the artist or the management. We help you to find the right celebrities for your corporate of private events. Please contact one of our agents to get free advice and we will help to get the world-famous artist on your party.