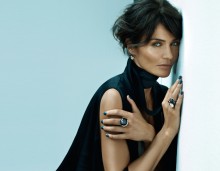 Helena Christensen is a Danish supermodel and former Miss Denmark. She is best known as the
“video vixen” in Chris Isaak’s music video for “Wicked Games”.
Helena Christensen was born in Copenhagen, Denmark on December 25, 1968. Before going into
modeling, she participated in beauty pageants and in 1986 claimed the crown of Miss Denmark, she
went on to compete in the Miss Universe pageant. She was eighteen. After her reign was completed,
she left Denmark for Paris to pursue a career in modeling. Helena Christensen is considered to be
1990s supermodel and has appeared on the covers of many fashion magazines. She is also a
Victoria’s Secret model for catalog and television commercials.
In 1990 she skyrocketed to fame, playing Chris Isaak’s girlfriend in his “Wicked Games” video.
Considered racy at the time, Christensen and Isaak portrayed lovers on the beach; she is topless for
much of the video but the nudity was relatively concealed so that the video could be shown on
television. Outside of modeling, Helena Christensen has had much success. She owns an antiques
store in Manhattan and she co-founded Nylon magazine with Mic Neumann. She is also a
spokeswoman for breast cancer research.
Helena Christensen lived with former INXS front man Michael Hutchins prior to his death and has
been linked with actor Leonardo DiCaprio and singer Billy Corgan. In 1998 she married former model
Norman Reedus; they have a son, but divorced in 2004. Helena Christensen She is left handed, loves
The Smiths and lives in Monaco, Copenhagen and Manhattan.

Do you want to hire Helena Christensen? Directly request a quote. In 48 hours we can send you the availability of Helena Christensen If you would like to book Helena Christensen, Entertainment Booking Agency is the right place. We will offer you the best price and contact the management or we directly contact Helena Christensen. For corporate appearances or speaking engagements you can contact our agents and the will help you true the process.

EBA is one of the biggest entertainment booking agencies in the World. We book hundreds of celebrities, artist, athletes and speakers in a year. Important to know is that we are not claiming to be the management of Helena Christensen. We are not the official agent for Helena Christensen. Companies from around the globe book these artists and speakers true our company be course we have one of the biggest networks and we always have direct contact with the artist or the management. We help you to find the right celebrities for your corporate of private events. Please contact one of our agents to get free advice and we will help to get the world-famous artist on your party.