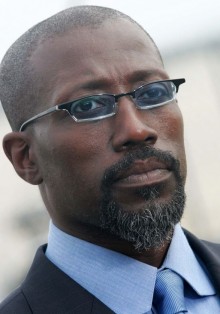 Born in Florida in 1962, Wesley Snipes made his film debut in Wildcats in 1986 and was cast in Mo’
Better Blues in 1990. In 1991, Snipes took the leading role in Lee’s Jungle Fever and also played one
of his most memorable characters—stylish crime lord Nino Brown in New Jack City. In 2008, Snipes
was sentenced to a maximum of 3 years in prison on tax evasion charges, an event that has colored
his career since.
Wesley Trent Snipes was born on July 31, 1962, in Orlando, Florida. Raised with his three sisters in
the South Bronx by his grandmother and mother, Snipes attended the High School for the Performing
Arts in New York City. After attending the State University of New York at Purchase, he pursued his
acting career in earnest.
Snipes made his film debut in Wildcats, starring Goldie Hawn, in 1986. After Spike Lee spotted him in
the Michael Jackson video Bad, the director cast him in Mo’ Better Blues opposite Denzel Washington
in 1990. The following year, Snipes not only took the leading role in Lee’s Jungle Fever, but also
portrayed one of his most memorable characters to date, that of stylish crime lord Nino Brown in Mario
Van Peebles’ New Jack City.
Throughout the 1990s, Snipes remained one of the biggest actors in Hollywood thanks to subsequent
turns in such successful films as the emotionally wrought The Waterdance, the big-budget action flick
Passenger 57 and the comedy White Men Can’t Jump. Though audiences might best remember him
in such action adventures as 1993′s Rising Sun and 1988′s Blade, Snipes has made a concerted effort
to explore other directions with such films as Waiting to Exhale in 1995, To Wong Foo, Thanks for
Everything! Julie Newmar (where he played an over-the-top drag queen) and One Night Stand in
1997, for which he won the award for best actor at the Venice Film Festival.

Do you want to hire Wesley Snipes? Directly request a quote. In 48 hours we can send you the availability of Wesley Snipes If you would like to book Wesley Snipes, Entertainment Booking Agency is the right place. We will offer you the best price and contact the management or we directly contact Wesley Snipes. For corporate appearances or speaking engagements you can contact our agents and the will help you true the process.

EBA is one of the biggest entertainment booking agencies in the World. We book hundreds of celebrities, artist, athletes and speakers in a year. Important to know is that we are not claiming to be the management of Wesley Snipes. We are not the official agent for Wesley Snipes. Companies from around the globe book these artists and speakers true our company be course we have one of the biggest networks and we always have direct contact with the artist or the management. We help you to find the right celebrities for your corporate of private events. Please contact one of our agents to get free advice and we will help to get the world-famous artist on your party.