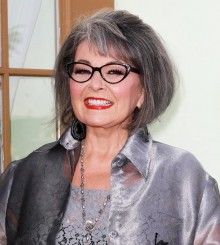 Born on November 3, 1952, in Salt Lake City, Utah, Roseanne Barr started in stand-up comedy before
starring in her own hit ABC sitcom, Roseanne, which ran for nine seasons and was pioneering in its
break from traditional family show formats. Barr won an Emmy Award and also starred in several films,
including She-Devil and Look Who’s Talking Too. She later did reality TV work with Roseanne’s Nuts.
Roseanne Cherrie Barr, one of America’s most watched sitcom stars during the late 1980s and ’90s,
was born on November 3, 1952, in Salt Lake City, Utah. She married Bill Pentland in 1974, and the
couple had three children.Turning her experiences as a wife and mother into a stand-up comedy act,
Roseanne Barr began performing at local clubs. Audiences responded to her “domestic goddess”
routine and she got bigger gigs and made friends such as comics as Sam Kenison. She started
making appearances on The Tonight Show in the mid-1980s.
In 1988, Roseanne became a television star with her own sitcom, Roseanne. Her realistic depiction of
a tough, but tender, wise-cracking mom struck a cord with viewers. In 1992, Roseanne received a star
on the Hollywood Walk of Fame. For her work on Roseanne, she received three Emmy Award
nominations, each in the outstanding lead actress in a comedy series category, before finally winning
the award in 1995. The series also earned her a Golden Globe, a Kids’ Choice Award and three
American Comedy Awards.
In addition to the show, Roseanne lent her talents to several feature films from the late 1980s through
the early 2000s. She starred in She-Devil (1989) opposite Meryl Streep and Ed Begley Jr., and
appeared in Freddy’s Dead (1991), Blue in the Face (1995) and Meet Wally Sparks (1997). She also
voiced a baby girl in Look Who’s Talking Too (1990) and a cow in Home on the Range (2004).
Roseanne wrote two books about her life and career experiences: Roseanne: My Life as a Woman
(1989) and My Lives (1994).
For almost a decade, viewers tuned in each week to catch the adventures of the Conners. After
Roseanne ended in 1997, Roseanne tackled a number of projects, including her own talk show, The
Roseanne Show, which ran from 1998 to 2000. She then returned to her stand-up roots with a HBO
comedy special, Roseanne Barr: Blonde N Bitchin’, in 2006. That same year, she released her first
kids’ DVD, Rockin’ with Roseanne: Calling All Kids. In 2007, Roseanne was chosen to host The
Search for the Funniest Mom in America on Nick at Nite. In March 2009, it was announced that
Roseanne would be returning to primetime with a new sitcom. That same year, she began co-hosting
a one-hour, politically focused show on KPFK.
Roseanne released Roseannearchy: Dispatches from the Nut Farm, her third book to date, in 2011.
That same year, she returned to the small screen with the debut of Roseanne’s Nuts on the Lifetime
network. The show, which Roseanne also executive produced, ran from July to September, 2011, and
followed Roseanne as she ran a nut farm in Hawaii.

Do you want to hire Roseanne Bar? Directly request a quote. In 48 hours we can send you the availability of Roseanne Bar If you would like to book Roseanne Bar, Entertainment Booking Agency is the right place. We will offer you the best price and contact the management or we directly contact Roseanne Bar. For corporate appearances or speaking engagements you can contact our agents and the will help you true the process.

EBA is one of the biggest entertainment booking agencies in the World. We book hundreds of celebrities, artist, athletes and speakers in a year. Important to know is that we are not claiming to be the management of Roseanne Bar. We are not the official agent for Roseanne Bar. Companies from around the globe book these artists and speakers true our company be course we have one of the biggest networks and we always have direct contact with the artist or the management. We help you to find the right celebrities for your corporate of private events. Please contact one of our agents to get free advice and we will help to get the world-famous artist on your party.